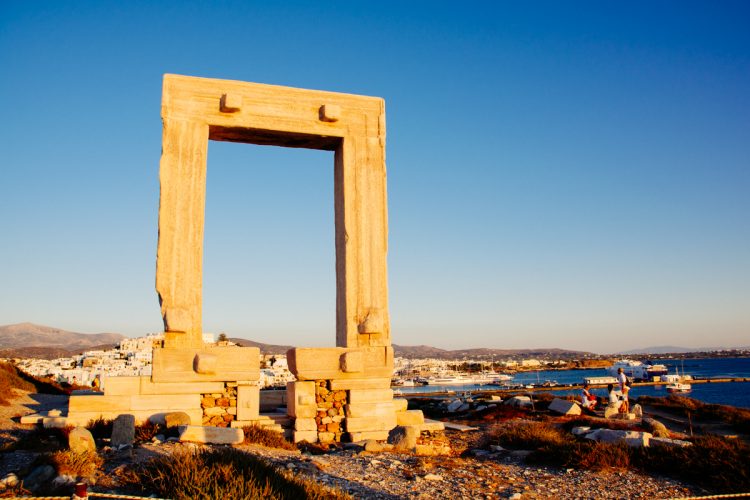 Neighboring Naxos is another beautiful island you can visit in the Cyclades.  While you are there you can visit two significant temples.

Visit the Ancient Temples of Naxos

A great day trip from Mykonos to take is Naxos. You can rent a sailboat in Mykonos to take you to this neighboring island or you can plan to visit it as you are hopping the Cycladic island chain.

Naxos is known for its lovely whitewashed main town called Naxos Town, a network of beautiful hiking trails and pristine, long and sandy beaches. What also makes this island special is its ancient Greek temples. Like our neighboring Delos, Naxos played a significant role during archaic Cycladic culture. Important and impressive temples were constructed and dedicated to Apollo, Demeter and Dionysos and there were several lesser sites that were considered sacred to other gods.

If you love the archaeological site of Delos which is next to Mykonos, we suggest you take time out to see the temples of Naxos.

Temple of Apollo – The Portara

The story of the Temple of Apollo begins with the tyrant Lygdamis. He ruled Naxos from 545 to 524 BC. He started building what he envisioned would be an impressively massive temple, but it was never finished.  What remains today is a massive marble doorway which is said to weigh 20 tons.   In Greek, it is known as Portara.  The Portara is considered an ancient jewel of Naxos, situated in a picturesque spot right by the port on a tiny islet called Palatia.  It’s a sight to see as you are sailing into Naxos Harbor. 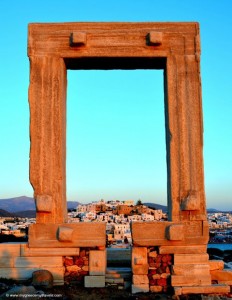 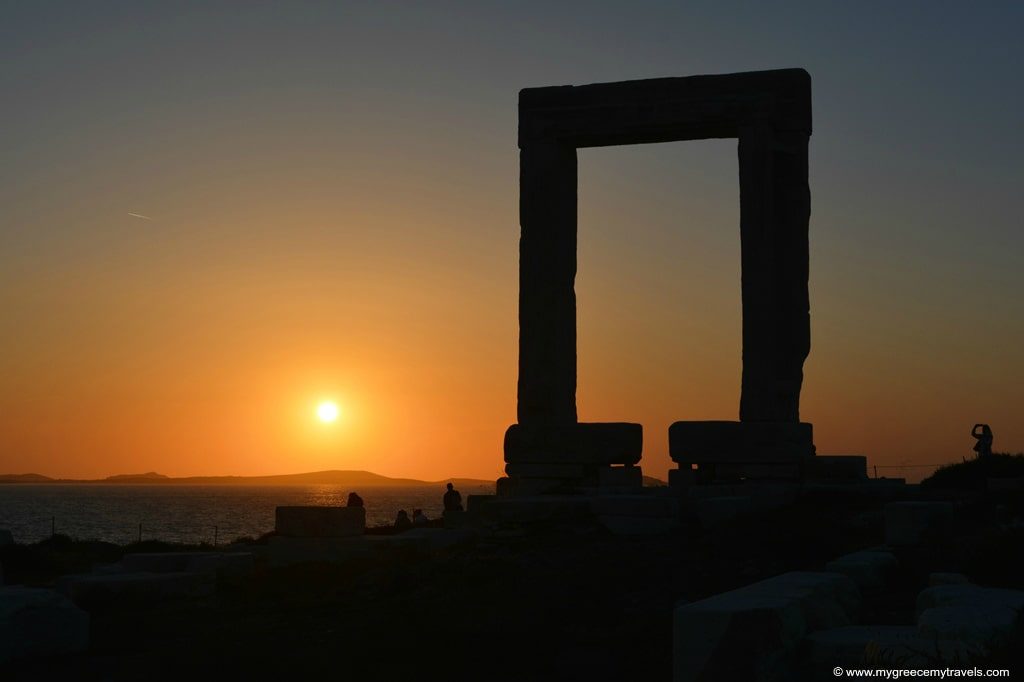 There were some walls standing, other than a doorway, during ancient times but over the centuries it the unfinished structure was dismantled so that the marble could be used to construct other buildings on the island.  The only part of the temple which remained was the door frame which was too heavy and big to take down or apart.

The best time to go is during sunset when many say there is a calming and peaceful energy that takes over Palatia.

Near the little village of Ano Sangri, in the inland area of Naxos, stands the Temple of Demeter. It was built in the 6th century BC. It’s not a very large temple but it is considered a significant archaeological find. The temple was built in honor of Demeter, the Greek goddess of harvest and grain. During that time, the harvest was important for survival. 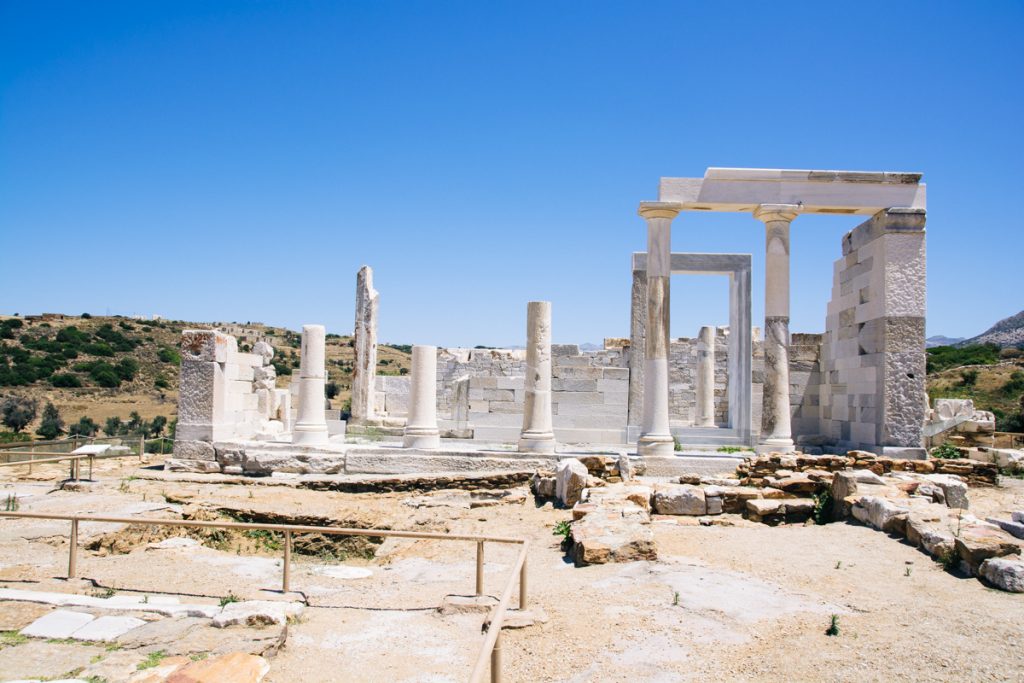 During the time of Christianity, the temple was turned into a type of church and a small chapel was built in the center of the temple but was later destroyed in the 6th century A.D., after an Arab invasion.  The temple was discovered during modern times in 1949 by archaeologist Nikolaos Kontoleon. Excavation works started in 1976 and went on for two decades.

Like the Temple of Apollo, the Temple of Demeter is considered a place of peaceful energy and it worth taking a drive to visit. There’s also a small museum that’s worth a look in the lower grounds of the site. 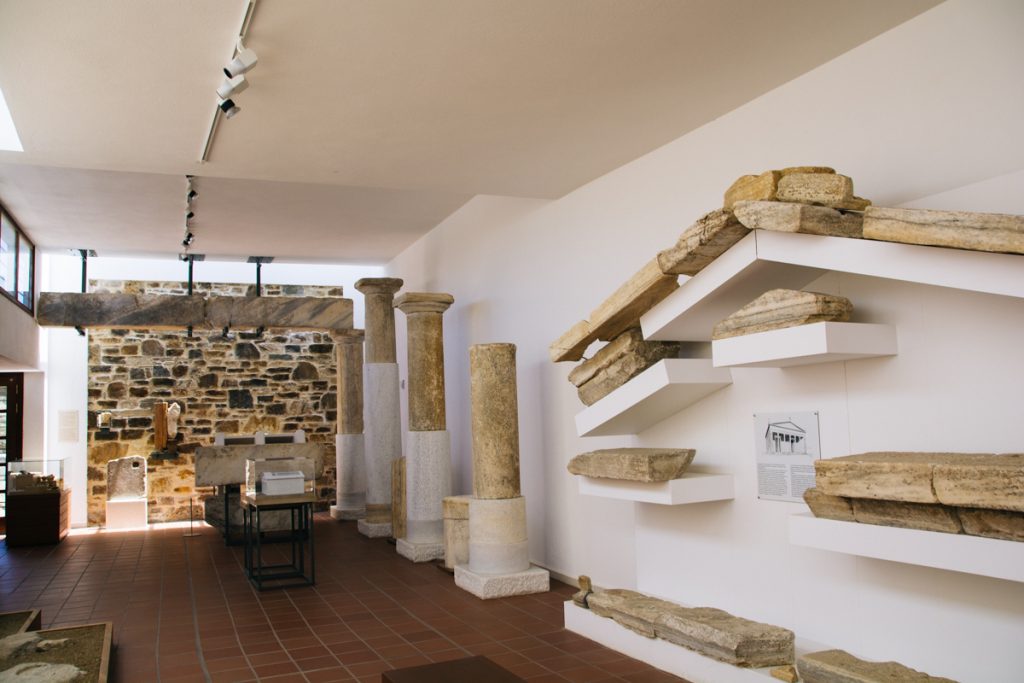 For more about the best things to do on Naxos, visit our earlier post: Day Trip to Naxos – Top Things to Do.

Have you ever visited any ancient temples in Greece?