How Greeks celebrate the New Year: Traditions and Customs 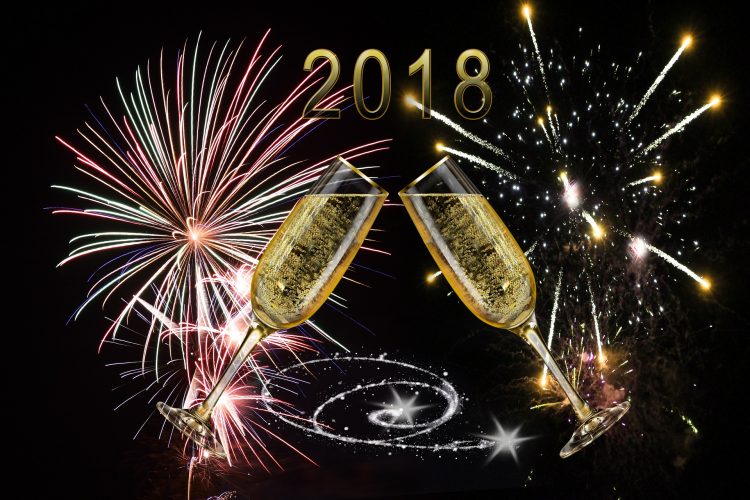 Every culture has its own unique traditions and customs. When traveling to Greece for the holiday season you will be fascinated by how Greeks celebrate the New Year. You will obviously want to experience all the must-do’s when in Greece for New Year’s. Soak in the sounds of the celebrating crowds and the aromas of traditional Greek Christmas culinary delights. We’ve compiled a list of all the Greek can’t miss holiday traditions.

Celebrate the New Year in Greece: Traditions and Customs

Greeks love their holidays and there is always a reason to celebrate. After the Christmas Day celebrations, the next anticipated event is the New Year or protohronia in Greek.

Fireworks light up the skies of many cities all over the world once the clock strikes midnight and we welcome the New Year. In Greece, fireworks are an important part of the celebrations. 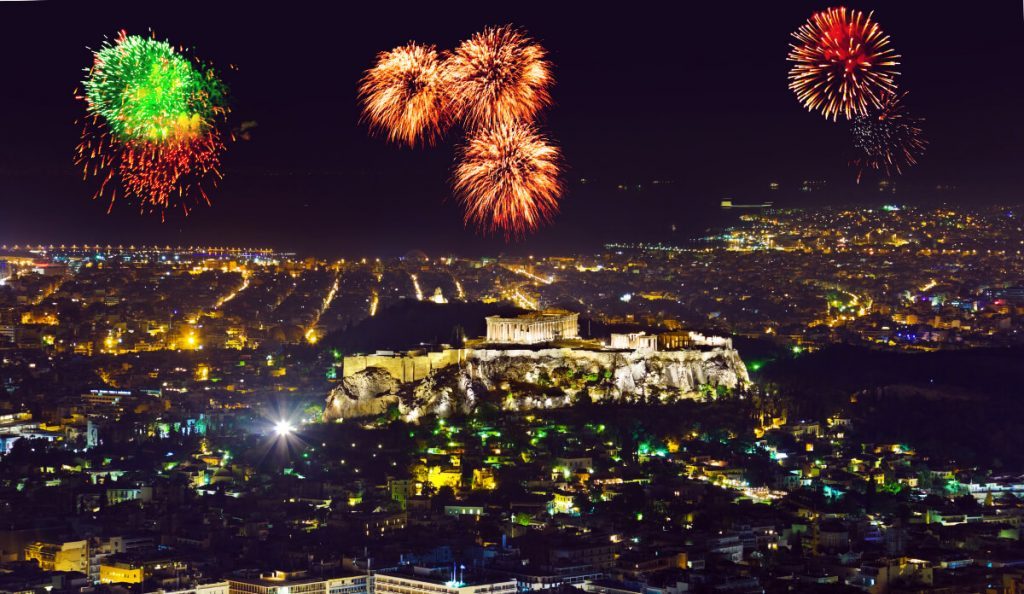 In Athens, you can watch the fireworks displays over the Acropolis, a truly magical experience. In every city or village, the locals organize their own special celebrations where people of all ages gather to welcome the New Year.

On the 1st of January the Greeks celebrate one of their most beloved saints, Saint Basil the Great. St. Basil who studied law and teaching, later sought a spiritually focused life. In 370 AD, he became the bishop of Caesarea where he created his own community called Basiliad. One of the most important traditions in Greece on the New Year’s is the vasilopita, which means Basil’s Bread. 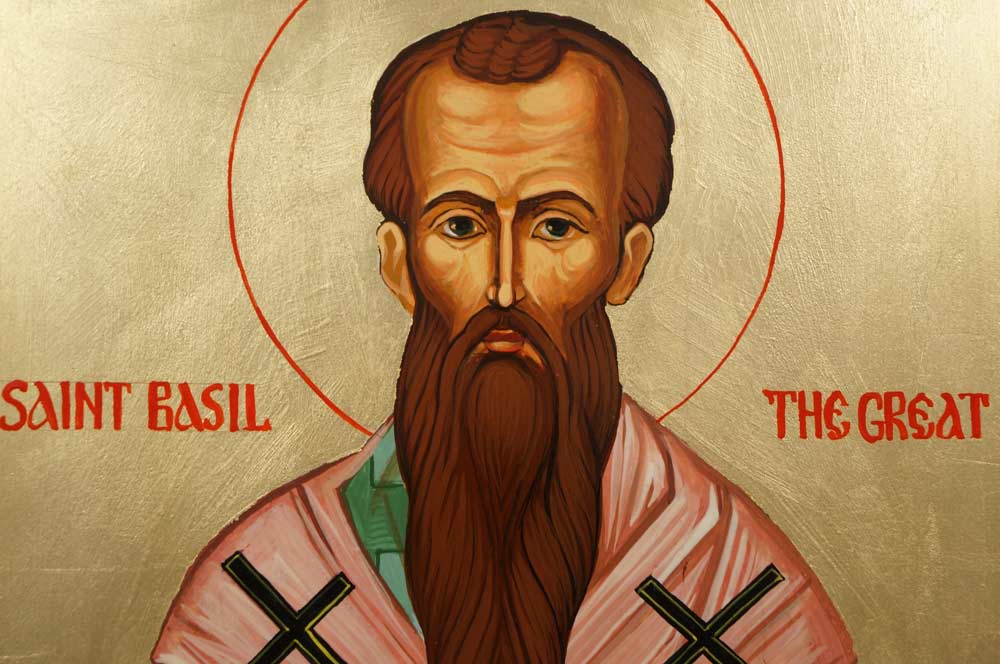 The story behind this traditional cake is that when the emperor had imposed an enormous tax on Basil’s flock during the time of great famine, the people gave away their jewelry in order to pay for this tax. St. Basil had  denounced this decision and eventually the emperor returned the jewelry.

Since St. Basil did not know which piece of jewelry belonged to whom, he baked a cake with the jewelry and cut it into pieces for his people.  He prayed that it will fall in the hands of its owners and miraculously his people received the piece with their belongings.

One of the most prominent Greek traditions is the cutting of the vasilopita. Every household cuts this special cake usually in the first minutes of the New Year. 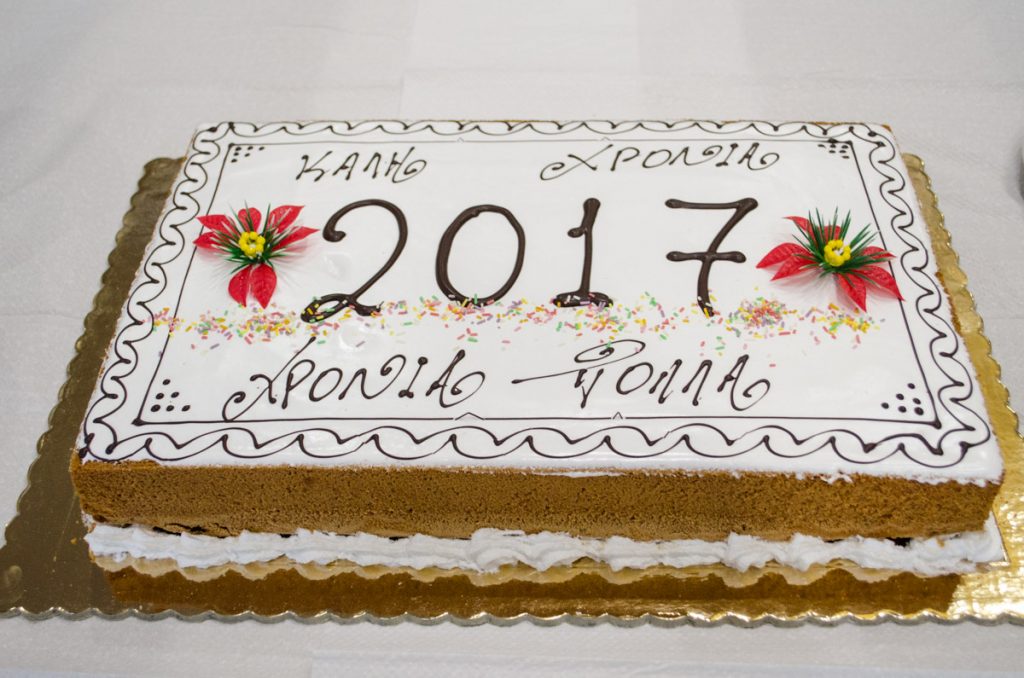 The vasilopita is cut by first making a cross and then separating the first two slices, one for the Christ and one for the household. Then it is evenly divided among family members and friends, staring from oldest to the youngest. A trinket is inserted inside the dough prior to baking. Whoever wins the coin is going to be blessed with good luck in the new year.

Hanging onions on the door 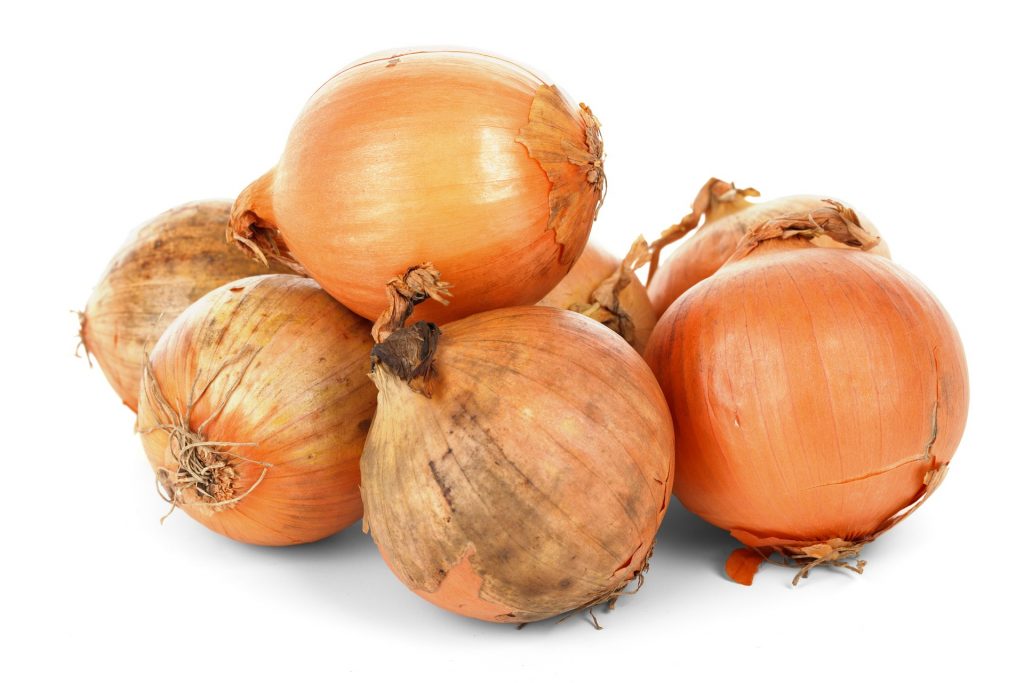 Since the ancient times onions have been a symbol of fertility, representing growth and rebirth. After the New Year’s Day church service, the family returns home and hangs up an onion inside the house, a ritual which is very important to make sure that the new year is filled with many blessings and good luck.

Pomegranates hold great significance in the Greek culture. They are considered a sign of renewal and regeneration. The Greeks give and receive pomegranates as a sign of good luck. The ritual is to hang a pomegranate over the front door during the holiday season and keep it hanging until the New Year. 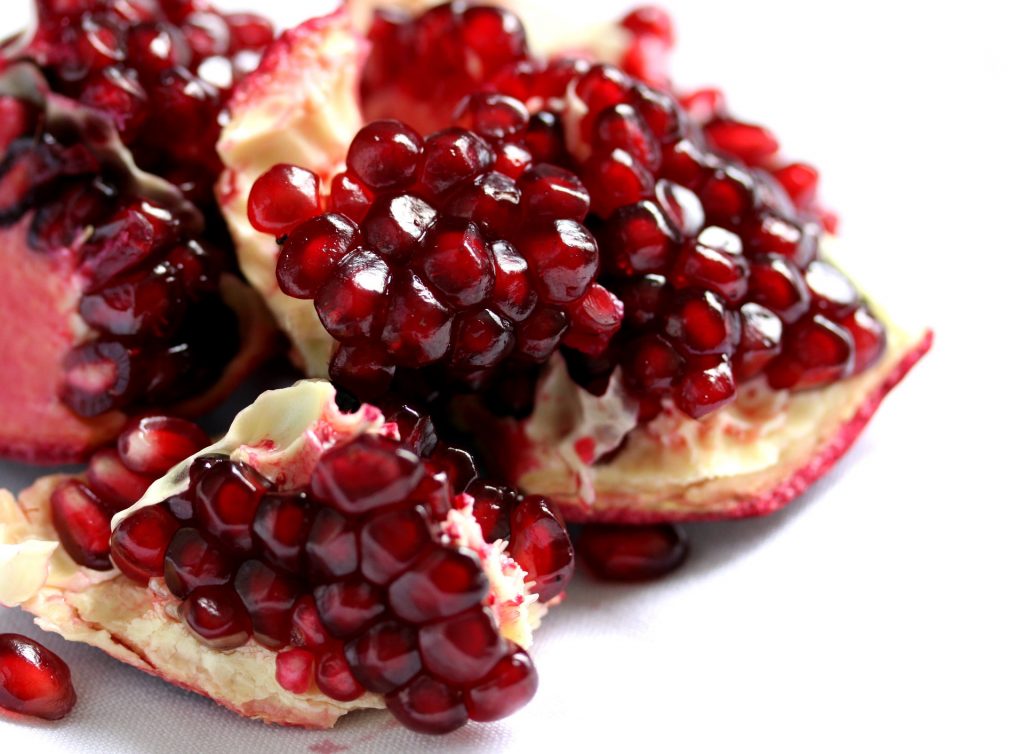 Once the clock strikes midnight, all lights in the house must be turned off and everyone must exit the house. One lucky member of the family is chosen as the first person to enter the house putting the right foot forward for good luck, known as the kalo podariko. The same person must smash the pomegranate against the front door. The more seeds spread out the more luck the household will have in the new year.

Play Cards during the New Year

Some people choose to go out and celebrate New Year’s Eve in night clubs or bars, others stay at home with friends and family. Greeks believe that the New Year is the time for good luck and fortune therefore many choose to play cards or even the lottery. 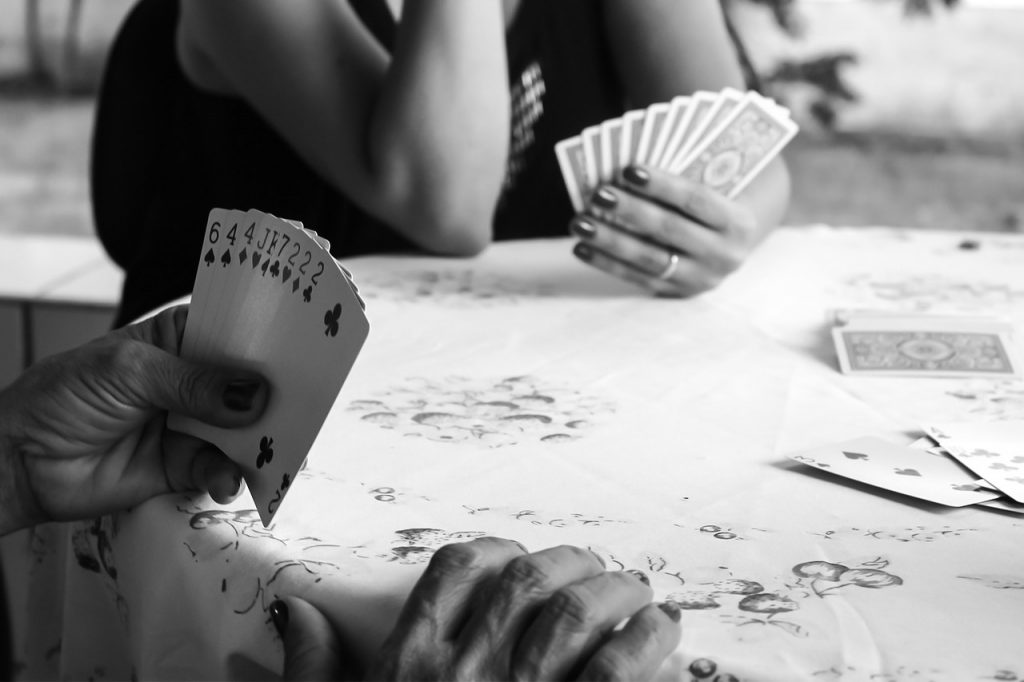 Playing cards between friends and family is a tradition which usually lasts until early morning hours, and since the game is played for good luck, the players don’t bet a lot of money. 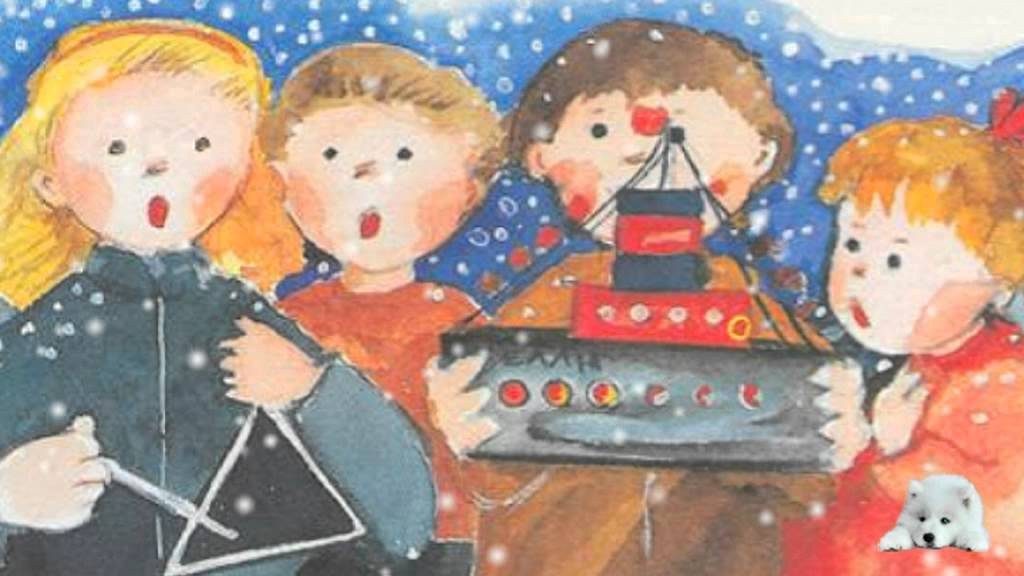 One of the much-loved Greek traditions is singing carols. Children playing the triangle and singing the kalanda go around their neighborhood. This is one of the oldest traditions and is still popular until this day. It is a custom to give children money when they come to your door and is considered good luck. 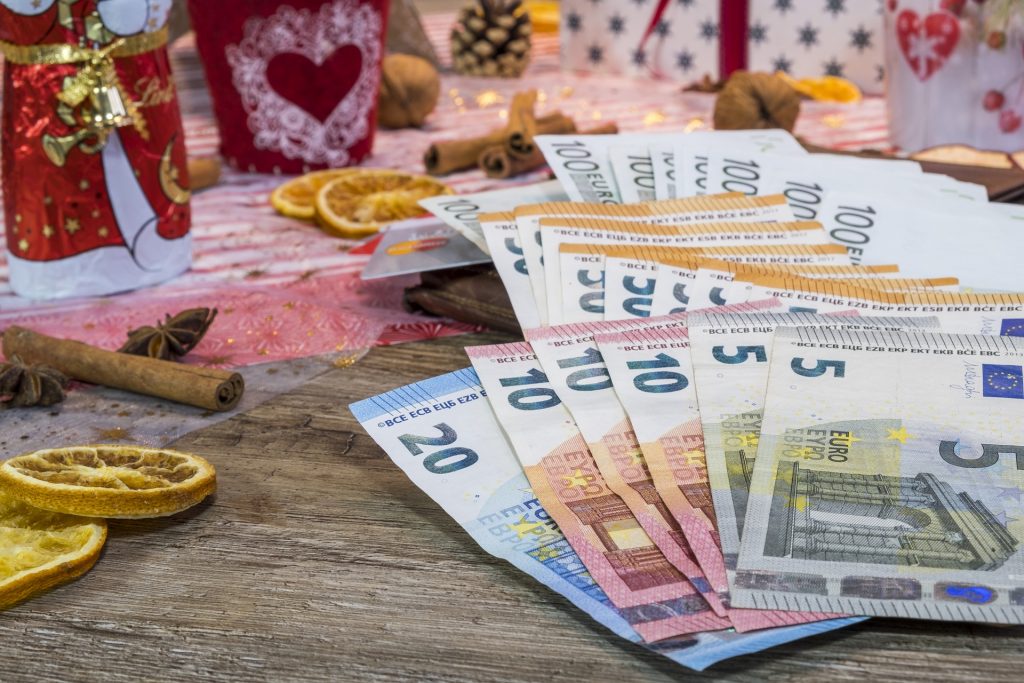 As much as in the rest of the world, New Year’s is a festive time in Greece and the Greeks look forward to a new beginning. The special traditions and customs all surround the idea of hoping for prosperity and good luck in the new year. We hope that you enjoyed reading about how Greeks celebrate the New Year. Have you celebrated New Year’s in Greece?